WHAT IS YOUR NOSE ATTACHED TO?


Sometimes, when people realize that from their own point of view they are faceless – and therefore capacity for the world - they then get worried about being able to see their noses. “I can see my nose – doesn’t this mean that I have a face here after all, that I’m not space for the world?”

Let’s look into this.

Clearly for others your nose is in the middle of your face. This is the objective view of you.

Where is it from your point of view, subjectively? What is it attached to, if anything?

When you look at your nose, instead of a single thing placed in the middle of a face, don't you see a blur, sometimes opaque, sometimes transparent, sometimes on one side of the world, sometimes on the other?

Are any of these attached to a face? Don't they come out of nowhere – suspended there with no support, emerging from the Void! 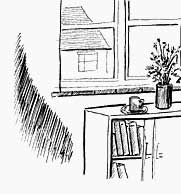 Notice how big your nose is! Close one eye – doesn’t your nose start somewhere near the ceiling and stretch right down to the floor?

Attend to the region your side of your nose. Here is a place only you can see. Is there anything there?

I find nothing at all, here on the near side of my nose blur. But this is a nothingness that isn’t a mere nothing – it’s an awake nothing filled with my world, including that nose.

My nose is nothing like other people’s noses. Theirs are small and on their faces. That’s the human nose for you. But mine is immense, multiple, and emerges from nowhere! This is not a human nose (just as my single Eye is not a human eye). It is God’s nose! I’ve discovered that God, although faceless, has a nose! (Well, many noses!)

Here is a self-portrait by Ernst Mach, complete with First Person nose (and moustache!). This drawing inspired Douglas Harding to notice his own headlessness in 1942.

So which is true? Are you what you look like to others, nose in the middle of your face? Or are you what you are in your own experience, “noses” emerging from spacious awareness?

I find this is not an “either/or” situation but "both/and". For others I have an appearance - I am a thing amongst things; for myself I am capacity for things – including my nose! I'm aware of both sides of myself.

A Remedy For Stress


So much unnecessary stress has its origin in identifying exclusively with the way others see us. Overlooking and invalidating my own point of view, I make a mistake about my deepest identity and find myself up against the world, separate from others, limited in my resources, vulnerable to all kinds of danger, and in the end, destined to die. It was vital to become self-conscious, to grow out of infancy into adulthood, but this need not be the end of the journey. Each of us can now go on to see Who we really are. This doesn't mean that we regress to infancy - we can be aware of both our True Identity and our human identity. However, becoming aware of our True Identity means we discover a stress-free space at the heart of our sometimes stressed lives. It is up to each of us how much we pay attention to this Resource. If we don't drink from this Well, we will probably find ourselves complaining of thirst, or even dying of thirst. And all the while the Water is so close, and free! Take a drink. Now. What have you got to lose? Your self! What have you got to gain? Everything, including your self!

Asking what your nose is attached to may sound ridiculous or trivial, but it isn’t, when you find that it leads to the Centre and Origin of the world, to the Peace that passes all understanding, to the Well at the World's End.


If I fail to see what I am (and especially what I am not) it’s because I’m too busily imaginative, too “spiritual”, too adult and knowing, too credulous, too intimidated by society and language, too frightened of the obvious to accept the situation exactly as I find it at this moment. Only I am in a position to report on what’s here. A kind of alert naivety is what I need. It takes an innocent eye and an empty head (not to mention a stout heart) to admit their own perfect emptiness.    On Having No Head, Douglas Harding

Forgetting what I'm told and imagine, what society with its common sense and the science of the object tell me to believe, and at last daring to look for myself and to take seriously what I find - well, what do I find? I find surprise upon surprise, beyond my wildest dreams. I see that what I had believed to be true of me and of the world is a pack of lies!    The Science of the 1st Person, Douglas Harding.


We had a mini workshop last night and did a couple of experiments with some success. As usual, I think I got more out of it than those who had come to find out what I was on about. One woman, in her early seventies, has excellent recall of her early childhood and remembers the time she thought she only had a nose on the occasions when it became necessary to wipe it. Her nose somehow manifested to meet the approaching handkerchief. A.M. Australia